skip to main | skip to sidebar

INVENTIONS THAT NEED TO BE INVENTED

So I'm sitting here preparing to write my final exam essay for government, and am feeling more than a little uninspired. So I think I came up with something that could inspire me and millions of lazy people worldwide. A Tone-Loc Motivational Doll.

Basically it would be a 12 inch doll, in the image of Tone-Loc. The doll would say "Let's do it" like at the beginning of "Wild Thing" when you pulled a string or pushed a button or squeezed its head; however those things work. I think this is what the world needs: Tone-Loc as some sort of patron saint of inspiration. Maybe if J.D. Salinger had one of these, he'd come out of hiding. Maybe if Mos Def had one of these, he'd give the world another Black On Both Sides. Maybe if JaMarcus Russell had one of these he wouldn't make people forget about Ryan Leaf.
Posted by Jay Williams at 11:03 AM 2 comments:

THE LATEST ADDITION TO THE FAMILY... 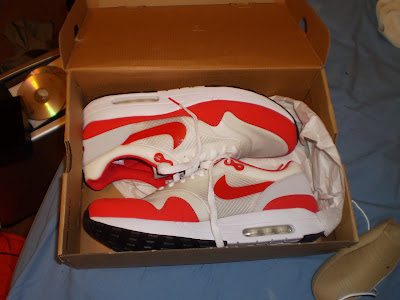 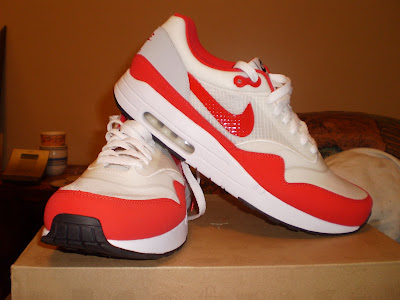 Got these about a month ago. I think sneakers have replaced that compulsion I had growing up trying to find records/CDs and Star Wars action figures (yes, very nerdy). I think the Internet killed my desire to hunt down music. I mean actually leaving my bedroom to hunt it down. (Strangely though, I think I'm still looking for new stuff, just not actually going into stores.) Star Wars figures...well, I think we can think George Lucas for ruining my desire to pursue Star Wars figures, though I'll have fond memories of the pre-Jar Jar Binks Era. So I moved on to sneakers.

These are Air Maxims, merging the classic look of the Air Max 1 with the Flywire technology. The past meeting the future.

The sad part of all this...can't wear them till next spring. To have something so beautiful marred by the wintry New England grit and slush, would be a crime.

Thanks to Goliath for having these on sale for a criminally low price and to Dallas Penn for alerting my of said sale.
Posted by Jay Williams at 10:29 PM 1 comment:

I write words about things for another site called Forces of Geek. Today, in my piece , I wrote about a phenomenon that I like to call "pulling a Bono." I wrote about how Kid rock often pulls a Bono at VH1's Hip Hop Honors." What does it take to pull a Bono you ask? I left it to a professional to definite it...my good friend The Wolf. The Wolf calls it like he see it, defining it as where an artist.

When asked for a definition, he specifically referred to Bono's commentary in the Shane MacGowan documentary The Great Hunger. The Wolf said Bono thinks he's "making some 'deep' comment about that artist’s talent." Furthermore, The Wolf said he "thinks of (Bono) as sort of an uber-famous and rich hipster…who ruins things I would otherwise enjoy with his stupid comments and less-than-stellar observations, thereby decreasing their awesomeness." That sums it up perfectly. To play devil's advocate, I'd like to add that I think Bono in all his majesty is probably being sincere when he pulls his eponymous move. However, this doesn't make it right. It's a lot like high school when I found out all the jocks were really into Rage Against The Machine. It kind of made RATM a little less special in my eyes which pushed me further into getting into hardcore, namely Inside Out. When your personal taste gets tainted by the wrong crowd, it puts a damper on things.

Examples of pulling a Bono:


Bonus: Eddie Vedder pulls a Bono while inducting The Ramones into the Rock and Roll Hall of Fame.
Posted by Jay Williams at 5:55 PM No comments:

I know I don't post often but every now and then something gets my proverbial goat.

Instead of releasing the greatest record that has never come out, Detox, Dr. Dre is adding an overpriced laptop which you can buy along with his overpriced headphones. Frankly, I don't care if Detox never comes out. I really don't. Maybe he should just concentrate on working out and lay off the music. If he worked on that instead of bodybuilding, maybe he'd have a record out.

A reminder of when Dr. Dre was relevant (at least to me)

Posted by Jay Williams at 1:29 PM No comments:

http://www.forcesofgeek.com/2009/09/drake-forever-feat-kanye-west-lil-wayne.html
Posted by Jay Williams at 1:37 PM No comments:

And you thought "Ether" was brutal.

I Date You So Much Right Now from jeff on Vimeo.

Courtesy of Itsthereal.com
Posted by Jay Williams at 11:44 AM 1 comment: